Born in Oakland, California, JoAnne Bird was raised in northeastern South Dakota by her grandmother, whom she credits for playing a major role in her creative education, from infancy to young adulthood. JoAnne is Santee Sioux and an enrolled member of the Sisseton- Wahpeton Oyate. JoAnne Bird knew from early childhood her destiny was to be an artist. After graduating from high school in Flandreau, South Dakota, she received art training at Dakota State University in Madison, South Dakota; Macalester College in St. Paul, Minnesota; and the Institute of American Indian Arts at Santa Fe, New Mexico. After working for the 3M Company, she decided to leave the commercial art field to devote her life fulltime to a professional art career.

JoAnne Bird’s paintings depict her Native American heritage, portraying the rich traditional way of life in a contemporary style. Much of her work is spiritual in nature and timeless. Her work often employs rich, bold colors in a fluid motion presenting images of warriors and horses that seem to be approaching the viewer straight off the canvas. Her preferred medium is acrylic, but she has worked in several media. 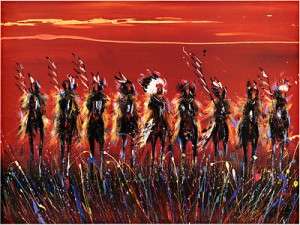 Her technique and mastery of handling a paint brush with precision are unique- a combination of controlled paint throwing and palette knife. Some see her style as evolving from realism to mystical impressionism. Her favorite artists are Vincent Van Gogh and Henri Matisse.

JoAnne Bird is also an accomplished bronze sculptor. Her sculptures, many larger than life, can be found throughout the United States and Europe. She has accepted commissions from several municipalities, including a 9’ bronze sculpture of Chief Wabasha for the city of Wabasha, in Minnesota.

JoAnne has won numerous awards and honors for her work, and in 1992 was inducted into the South Dakota Hall of Fame as Artist of the Year. In May of 2011, she was awarded an honorary doctorate in humanities and the arts by South Dakota State University. Jerry Jorgensen, Dean of the College of Arts and Sciences, remarked, “JoAnne has been an ambassador for the state of South Dakota, not only through sharing her paintings, sculpture work and techniques with students at SDSU, but also for infusing cultural history and traditions into her artwork.”

Dr. JoAnne Bird has exhibited at the CWS Artists of the Plains Show & Sale for many years, and today many of her pieces are found in private and corporate collections and art museums around the world.