About the year 1880, at a time when the demand for large numbers of hair pipes for use in making elaborate breastplates was increasing, the Plains Indians began to obtain a cheaper and much less fragile hair pipe than the shell one long in use. The peculiar circumstances of the origin of this substitute – the bone hair pipe – comprise an interesting chapter in the history of Indian use of hair pipes which is at the same time a noteworthy case history in invention.

While I was stationed on the Blackfeet Reservation in Montana in the early 1940’s, both Frank Sherburne and his brother Joseph Sherburne, Browning merchants, independently told me of the role their father, the late Joseph H. Sherburne, had played in the invention of the bone hair pipe during his early days as a trader among the Ponca Indians.

The Records of Licenses to Trade (vol. 5, p. 115) in the National Archives state that Joseph H. Sherburne was issued a license to trade with the Ponca Indians between Arkansas and Shawkaskia Rivers in the Indian Territory on September 10, 1878.

Frank Sherburne said that in his father’s first year of trade with the Ponca he had among his wares a quantity of corncob pipes. The corncob bowls were equipped with bone stems. These pipes sold readily but without comment from the Indians. Upon his next trip to the Ponca, Mr. Sherburne found the corncob pipes in great demand. White Eagle, chief of the tribe, showed him an elaborate neck ornament made of the bone stems of the pipes strung on buckskin thongs. He wanted more pipestems in quantity.9

Mr. Sherburne, desirous of pleasing the chief, wrote to S. A. Frost, in New York, from whom he had purchased glass beads and other articles for the Indian trade, explaining the problem and asking if it would be practical to furnish a quantity of long, tubular bone “beads.” Frost considered the matter and after he became convinced that the demand for this product was great enough to justify its perfection, set about having the bone articles made. However, a delay of more than a year was encountered before the new bone “beads” were ready for the market. When they became available in quantity Frost not only sold them to Mr. Sherburne but to many other traders on other reservations as well.

I have not seen a sample of the bone pipestem furnished the Ponca by Mr. Sherburne in 1878. However, Carl V. Otto, vice president of the Missouri Meerschaum Co., established in Washington, Mo., by Henry Tibbe, inventor of the corncob pipe in 1872, kindly furnished me for study a pipe known to

have been made by that firm prior to 1900. It is shown in plate 30, shown above.  The bone stem bears only a superficial resemblance to the bone “beads” perfected by Mr. Frost. In designing the bone beads

Frost seems to have followed the pattern of the shell hair pipes which for so many years had been made for the Indian trade at Park Ridge, N.J., some 25 miles from his New York headquarters. Not only did the new bone beads follow the tapered form of shell hair pipes literally but they were made in approximately the same lengths as the shell pipes. They were, in reality, bone hair pipes and became known to Indian traders as hair pipes.

The Sherburne brothers had no knowledge of where or how the bone hair pipes were made. However, Mr. Otto supplied a valuable clue when he wrote me that the bone stems of corncob pipes were furnished his firm by Armour & Co. of Chicago. Through the kind cooperation of J. V. Hurson of Armour & Co.’s Washington Office, Edward N. Wentworth, director of Armour’s Livestock Bureau in Chicago, was interested in the problem of the manufacture of the bone hair pipes. In the absence of written records, he discussed the matter with long-time employees of the company, some of whom

are now retired. He concluded that Armour & Co. definitely furnished the bone material from which the hair pipes were made, and that the raw material was supplied to Mr. Frost, of New York, in quantity. Mr. Wentworth further stated that the bones from which hair pipes were made were the metacarpal or lower leg bones of cattle. A specimen of this bone, kindly furnished by him, together with a finished bone

hair pipe in the collections of the United States National Museum are shown together in plate 30,.

possible to offer them to Indians at a lower price than had been asked for shell hair pipes. It must have been the pressure of competition with this cheaper, stronger bone hair pipe that caused the New Jersey shell hair-pipe makers to discontinue operations in 1889, less than a decade after bone hair pipes began to reach the Indian country.

In the period of general economic depression among the Plains Indians following the extermination of the buffalo, during which they subsisted largely upon Government rations, possession of an elaborate hair-pipe breastplate or necklace was a coveted symbol of greater-than-average prosperity among these proud people. Not only did the Indians wear these ornaments when they attended ceremonies and participated in traditional social dances on their own reservations, but they wore them when they dressed to visit the Great White Father in Washington, when they took part in wildwest shows, such as the famous one organized by William F. Cody (Buffalo Bill) in 1883, and when they appeared in costume at national, regional, State, and local exhibitions or fairs.

The cessation of intertribal wars after the Plains Indians were settled on reservations was followed by a period of increased friendly contacts between neighboring tribes formerly hostile to one another. Visits back and forth among these Indians were accompanied by the exchange of gifts between members of different tribes. These conditions encouraged diffusion of hair-pipe breastplates and necklaces during the Reservation Period.

Pictorial sources reveal the continued use of hair-pipe breastplates during the Reservation Period by men of all those tribes known to have made use of this ornament prior to 1880, i. e., the Comanche, Kiowa, Kiowa Apache, Ponca, and Pawnee in the south; the Arapaho and Cheyenne in Oklahoma, Wyoming, and Montana; the Teton Dakota of the Dakotas; and the Ute west of the Rockies.

Tribes of the Oklahoma region preferred the wide, relatively short breastplate comprising 4 or more rows of short to medium-length pipes, rarely more than 30 pipes per row. This type was worn by Quannah Parker, the famous Comanche chief, in 1892 (pl. 32, a). It was also worn by the prominent Kiowa leader Running Bird when he attended the intertribal Indian council on the Little Big Horn in 1909 (Dixon, 1913, illus. opp. p. 52).

Other tribes of the Oklahoma region appear to have adopted this type of breastplate during the Reservation Period. Bureau of American Ethnology photographs show it worn by Sauk and Fox (before 1892), Oto and Tonkawa (1898), and Osage (1906). A 3-row breastplate was worn by a Caddo delegate to Washington in 1898.10

The Teton Dakota and Ute preferred a breastplate of long hair pipes, usually 2 but in some cases 3 rows in width, and not uncommonly more than 40 pipes per row. The famous Oglala chief, Red Cloud, was repeatedly photographed wearing this type of breastplate. One of these portraits appears in plate 32, c. Spotted Tail, the noted Brule chief, also wore this type of breastplate (pl. 32, b). 11 Among these two tribes of Teton Dakota the hair-pipe breastplate was very popular in the Reservation Period. The longest breastplates pictured were worn by men of these tribes. About 1900 George Little Wound wore a breastplate composed of 2 rows of 63 long pipes each (pl. 31, a).At the

St. Louis Exposition in 1904, Little Soldier, an Oglala, wore a 2-row breastplate containing a total of 140 long pipes (Chicago Mus. Nat. Hist., neg. 15932). This is the largest hair-pipebreastplate of which I have knowledge.  It was apparently from the Teton that this type of breastplate was diffused to other Siouan tribes north of the Platte River. Photographs portray the wearing of the 2- or 3-row breastplate by men of the Assiniboin (1882), Omaha (1909), Yanktonai (1903), and Yankton (1904) tribes.12 My elderly Assiniboin informants in 1953 stated that the first breastplates worn by men of their tribe came from the Sioux (Teton), although the Assiniboin themselves began to make them in the 1880’s. They claimed the Assiniboin of Fort Peck Reservation began to wear these breastplates before they were adopted by men of that tribe living farther west on Fort Belknap Reservation.

However, the Crow Indians were little impressed by the hair-pipe breastplates of their former enemies, the Teton. The large [p. 66] series of Crow photographs in the Bureau of American Ethnology files do not depict a single example of the use of this ornament. In the spring of 1953, an elderly Crow informant told Dr. Claude Schaeffer that hair-pipe breastplates were not favored by the older Crow men and that it has been only in recent years that young Crow Indians have worn these ornaments in the grass dance.

Men of the Blackfoot tribes also showed relatively little interest in hair-pipe breastplates. Piegan and Blood informants told me that men of their tribes did not make them but acquired a few breastplates from the Assiniboin as gifts, possibly as early as 1893. Among the Blackfoot they were worn primarily in the grass dance and other social dances. R. N. Wilson’s photograph of Assiniboin grass dancers on a visit to the Blood Reserve in 1893 depicts the wearing of hair-pipe breastplates by two or three participants (pl. 36, b). The Chicago Museum of Natural History possesses a photograph (neg. 26672) taken at the Piegan Sun Dance of 1899, showing two wearers of hair-pipe breastplates. 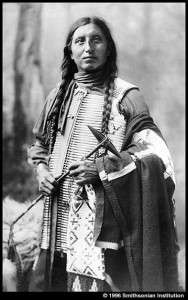 Spinden (1907, pp. 217-218) was of the opinion that the bone-bead (hair pipe) breastplates worn by Nez Percé men were “undoubtedly introduced from the Plains.” He found these breastplates were less common among the Nez Percé than were breast ornaments composed of several strings of small disk-shaped beads. Teit (1930, p. 81) reported the wearing of “breastplates of long, polished bone beads” [hair pipes] by Coeur d’Alêne men in the early years of the present century. However, his statement that they were “adopted by the Coeur d’Alêne about the beginning of the 19th century” must be discounted. It is unlikely that that tribe began to wear hair-pipe breastplates before the 1890’s.

Teit’s informants showed their lack of long familiarity with hair pipes in their testimony as to their origin. Some thought “the bones were polished buffalo bones made by the tribes east of the Coeur d’Alêne; while others claim(ed) that they were introduced by the fur traders and were quite unknown to all Indian tribes long ago.”

The hair-pipe breastplate does not appear to have gained popularity among the Indian tribes east of the Mississippi. However, a portrait of Joseph Sherritt of the White Earth Band of Chippewa, taken in 1911, shows him wearing a two-row breastplate of hair pipes (pl. 31, b). Another two-row breastplate, collected in 1911 among the Chippewa of White Earth Reservation, Minn., is in the collection of the United States National Museum (cat. No. 392661).

In 1917 the Plains Cree leader, Little Bear, gave Frank Bird Linderman a breastplate of bone hair pipes of the 2-row pattern, 35 pipes per row. The hair pipes are 4 ½ inches long. This specimen (Museum of the Plains Indian, cat. No. 539L) may have been in Little Bear’s possession for a number of years prior to 1917.

Information and Photos gathered from the Smithsonian institute Libraries. This information shows the constant adaptation of tribal life and how trade was an integral part of many tribes before, during and even after the european settling of the Americas.