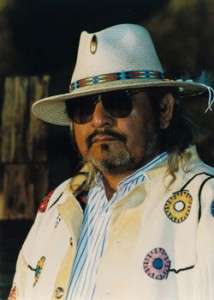 Sam English would never describe himself in that timeworn phrase, “the tortured artist,” but he truly is — or was. He spent the first 40 years of his life running from art, embracing alcoholism in his run from the creative. Sam has spent the first chapters of his life as an alcoholic, the later chapters — the one of deep creativity — as an artist and an activist in the healing work of the recovery movement.

“Ever since I can remember I’ve had a real deep desire to make art. In 1968 I moved to Albuquerque. I had a vision of painting and of owning a business in Old town; in 1982, that actually happened.

“I took my first drink at 14, to be part of a crowd. I liked the feeling of alcohol, it gave me a superhuman persona I was looking for. If a girl said no, I could swallow it. It took away the fear of living, of life, but the next morning there was guild and shame. That first drink lasted for 25 years until I was 39.”

Sam explains that he was a binge drinker, and although he wasn’t a full-time skid row bum, where they drink Nyquil, mouthwash, rubbing alcohol and hairspray) he spent some time there. He described nights spent around a trash bin where blankets and clothes were stashed. In the video, Colores, produced by KWME TV of Albuquerque, he walked through that very same skid row and said, “This is real. I don’t ever want to come back to this kind of life.”

But throughout those years of drinking the desire to create art remained. He admits to being right down at the bottom, “picking up beer cans with a plastic cup to get what we would call corners to get some alcohol into your system.” But it was the fantasy of becoming a working artist that continued to beckon and to — eventually — overtake the drinking.

“I used to fantasize sometimes about the things I could do when I was sober, that I could be a working artist. I could actually help the product of this subculture living in this alley. For lots of years it was just part of my drinking fantasy,” Sam says. A compassionate and caring man, he refers to his skid row companions as his brothers and sisters. “The difference between them and me is that some of them never got sober.” Sam was born June 2nd, 1942.

Sam was raised in Ignacio, CO. He describes his upbringing as that of a “basic middle class American.” “The only thing was that I was an Indian and I knew the history of Indian people. My parents did not talk about that because in order for them to survive in the system you don’t say anything about the history, you accept life as it is. So we were taught that, and brought up with a work ethic, an educational ethic, all these things. “But nobody ever talked about art, or perceived art at that time as being a potential career. So I tried to do other things in my life. I tried to go to college, I tried other careers with potential upward mobility. It just didn’t fit me.

“I got involved in 1968 with Indian civil rights issues because I was more aware of Indian history. I had a lot of anger and hostility about the way we were treated as humans. Self pity, that is what alcoholism is all about. The scariest thing to happen when you’re an alcoholic is to come home and not remember how you got home.” Sam remembers the date that all of that changed. “On December 10, 1981, I drove my lance and decided I was not going to drink anymore, that I was going to be a brave person and that’s what I’ve done. My fantasy of getting sober and alcohol free became a plan of being an artist and working with people. I couldn’t exact the plan until I quit drinking so I quit drinking.”